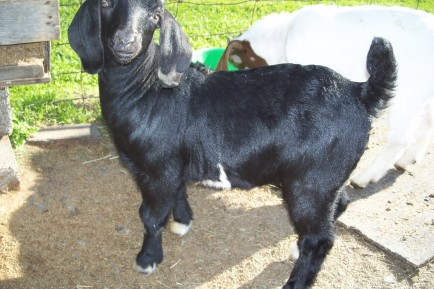 ***Registration is pending completion through the ABGA***

Vannah is black with 4 white ankle socks and has white under her barrel.

She is a well put together Fullblood doe.

Vannah has had no health issues and is growing well.

Vannah is one of triplets.

She has a black  sister.

She also has a traditional brother(#1018) with dapples on his head.

Vannah’s Sire is a black and white paint with white dapples. He has generations of dappled and colored genetics.

Vannah’s Dam is white with a black head. She carries colored and traditional genetics.